A Visit With Scottish Pipers

It was a beautiful late summer day that I went to meet with the pair of Scottish pipers who participated in the 2018 Michigan Traditional Arts Apprenticeship Program, Andrew Duncan and his apprentice Duncan Petersen-Jones. As I drove with my windows down to Andrew’s home in Royal Oak where their lessons had been taking place, I knew I had arrived when the sound of drones wafted out on the street, greeting me.

Andrew Duncan, or Drew, is the director of the pipe band at Alma College and owns and operates Duncan’s Highland Supply. He has also played with many pipe and drum bands and has even led bands as the pipe major. Duncan Petersen-Jones recently graduated from Michigan State University and is currently a Master’s student in Composition at University of Michigan. Listen to how they each started playing the bagpipes below:

Since February, Drew and Duncan have been working together to further Duncan’s skills as a Highland piper. They worked on building repertoire and technique so that Duncan can compete in solo piping competitions at a grade two level, the second-highest skill level at which you can compete. Drew also oversaw Duncan’s transition from synthetic drone reeds to cane drone reeds. Cane reeds are the more traditional choice, but because they are made of organic material they are often affected by changes in weather and require tuning more often–and thus can be more demanding to play. Their apprenticeship allowed Drew to impart the skills and finesse involved in using cane drone reeds.

Towards the end of their apprenticeship, Drew and Duncan performed at the Lansing Eastside Folklife Festival on August 11, 2018. They used the event to showcase some of the techniques and repertoire Duncan learned during the apprenticeship. 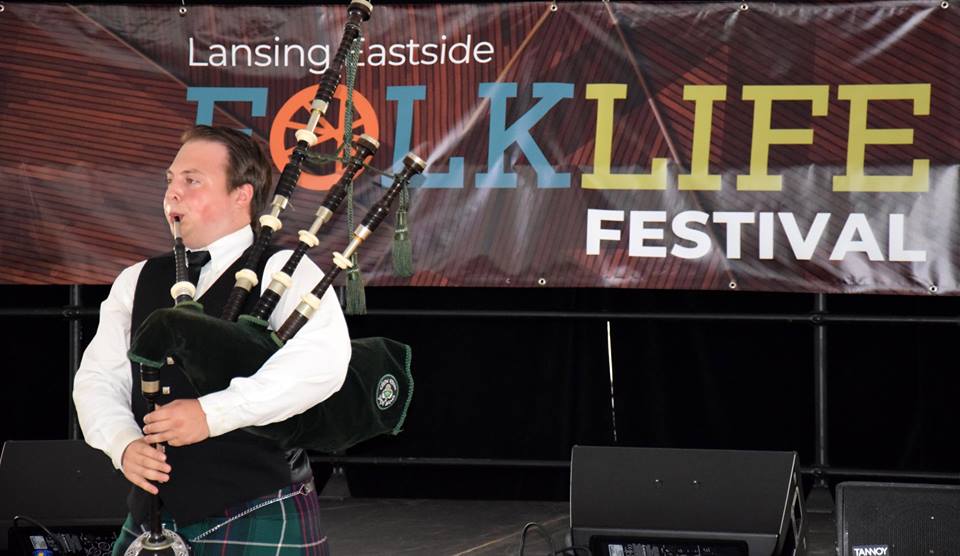 Duncan Petersen-Jones piping at the 2018 LEFF.

If you’d like to learn more about what Drew Duncan does, you can read his bio at Alma College. To read more about Duncan Petersen-Jones, visit his website. He has recently published a book of original compositions for bagpipe which you can read about and listen to on his website.

Molly McBride is Fieldwork Coordinator at the Michigan Traditional Arts Program. She has a Masters in Ethnomusicology from Memorial University of Newfoundland, enjoys playing around with old time music at jams and dances, and is constantly humbled by people sharing their stories with her.