“I can’t be still myself!”: a tribute to Algia Mae Hinton 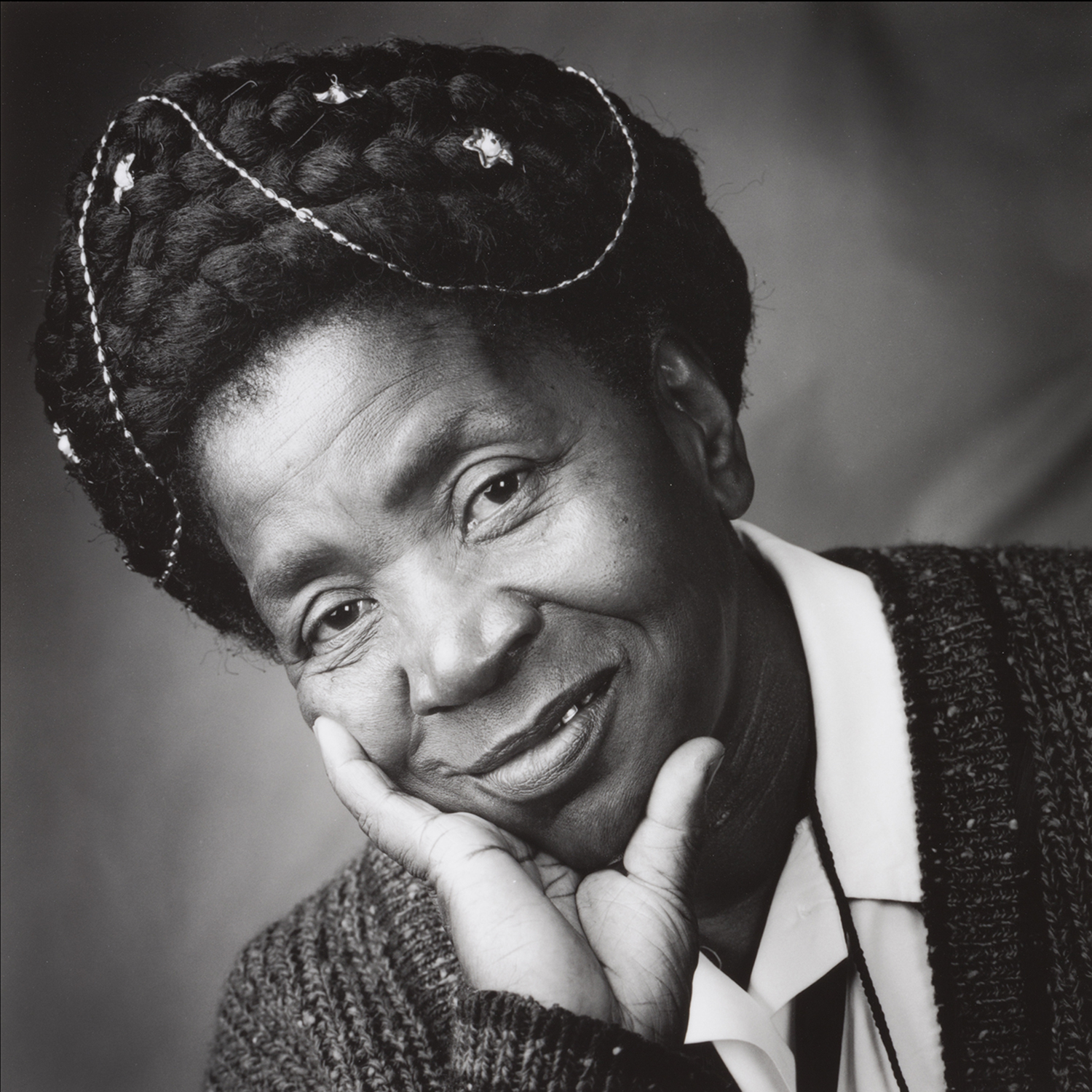 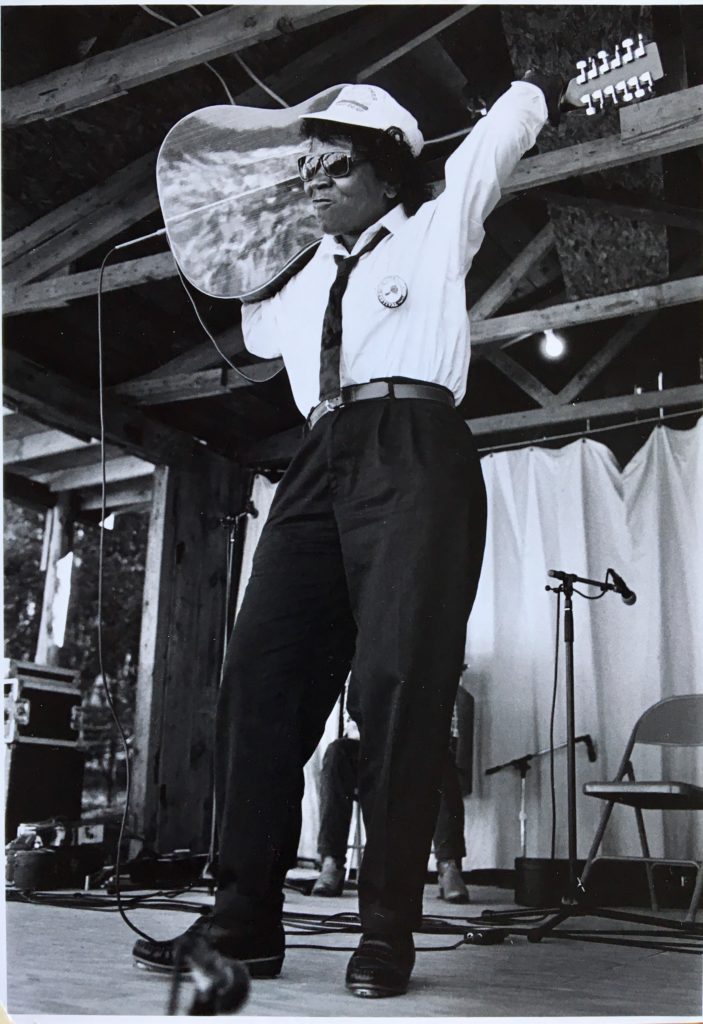 Algia Mae Hinton, buck dancer and blues musician passed away February 8th, 2018 at age 88. While I’ve been an admirer of her music and dancing from afar since I was an adolescent, I regret that I never had the chance to meet Algia Mae. I’ve spent the last month reaching out to those that worked with her to get some sense of her incredible contribution to the story of American traditional music and dance.

Algia Mae Hinton was born in 1929 in O’Neal Township in Johnston Co., North Carolina. Her parents, tenant farmers, taught her how to play the guitar and buck dance. Algia’s mother played blues guitar in a style unique to the North Carolina Piedmont. Algia Mae learned the distinctive Piedmont finger-picking technique from her. Algia Mae had seven children and spent several years spent living in Raleigh, North Carolina but returned to Johnston Co. in 1965 after her husband passed away. Upon relocating to her home community, Algia Mae worked as a field laborer and played music at local parties and for her children.

Unlike many masters of traditional arts, I was glad to learn that Algia Mae Hinton received some recognition during her life for her playing, singing, songwriting, and dancing. She performed at the North Carolina Folk Festival in 1978 and later at the National Folk Festival, the University of Chicago Folk Festival, and even at Carnegie Hall. Alan Lomax recorded her dancing, singing, and playing on her porch in Johnston County, North Carolina for Eleanor Ellis’ film Blues House Party in 1983.

I asked Peter McCracken, programming director for the Festival of American Fiddle Tunes, about his time working with Algia Mae: “I think it was 1993 – we went on a little tour, traveling with a big tent, seating, sound, lights, going to small towns that had no venue. Usually set up in a ball field. She was so tickled, couldn’t stop laughing, and every time she did she hid her mouth, covered her mouth with her hand…I just loved the way that music and dance and rhythm were inseparable for her.” Algia Mae smilingly confesses this herself in the film Talking Feet, “I can’t be still myself!”

When I asked about Algia Mae among my own folk community in Michigan, I learned from Peggy Brisbane, the Wheatland Festival’s beloved photographer-in-residence, that Algia Mae performed at the event in 1990 as a part of The North Carolina Blues Review with fellow legends Lightnin’ Wells, John D. Holeman, and Big Boy Henry. 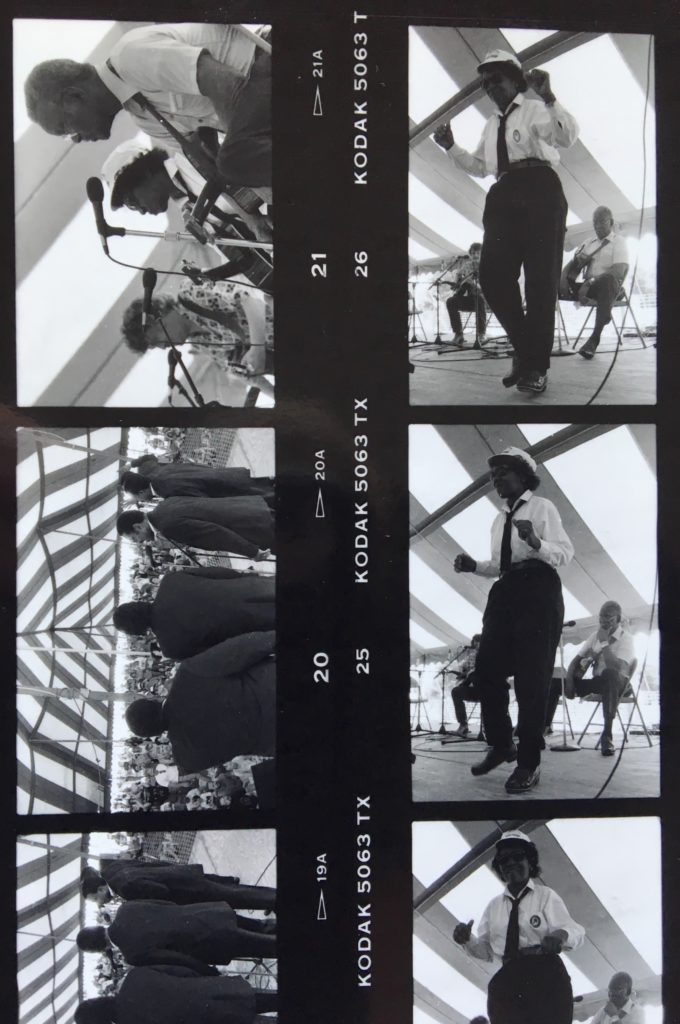 Algia Me Hinton buck dancing with Lightnin’ Wells and Moses Rascoe at the Wheatland Music Festival in Remus, Michigan, September 1990, photo by Barclay/Brisbane

Much has been written about Algia Mae’s guitar- and banjo-playing, singing, and songwriting, but it’s as a dancer that I most acutely feel her loss. She was one of the most widely-known buck dancers, a style of percussive dance originating in the Piedmont performed primarily in African-American communities to the soundscape of the blues. Thomas F. DeFrantz, dance scholar and chair of American-American studies at Duke University, describes buck dances as percussive dances originating in the 19th century characterized by weighted downward-directed foot movement.

Last night I spent several hours playing and replaying clips of Algia Mae’s performances from Talking Feet. I wanted to try to get a sense for what her steps felt like in my moving body. In her signature piece, “Buck Dance,” she plays the guitar and dances simultaneously with incredible ease. Her poise is captivating. She contacts the floor with clean stamps and brushes, swiveling in her open toe dress shoes. In my (mostly futile) attempt to imitate her steps, I’m struck by her masterful alternation between swung footwork and more straight-ahead rhythmic feel. It’s only as I try to get inside some of her movement that her facility in choosing the placement of each sound becomes humblingly apparent. She begins with a crisp syncopated stomp on the right foot and follows with a playful swing of the left foot, brushing and shuffling forward and back to complete her 4-beat phrase. The step feels playful, yet perfectly coherent.

When I show this clip to tap dancers, they see a time step: a short clear footwork sequence dancers use to cue musicians and bring in the band in performance. I don’t think Algia Mae would have called it that. For her, music and dance were already one. I’m puzzled by the fact that her dancing remains unknown in the contemporary urban tap community. Could this have been because she was a woman? Could it be because of her rural background? I have to confess that I am tickled that her work continues to baffle the tap dancers with whom I share this video, especially this signature piece. At one point she lifts her guitar up, playing it behind her head and continues to perfectly punctuate percussively on the floor.

Dancer Ira Bernstein shared remembrances of Algia Mae and shed some light on the importance of her contribution to American dance: “She was very demure…she let her art speak for itself.” According to Ira, Algia Mae represents something very important, a link many people don’t know about between southern dance and tap dance. “A lot of tap dancers don’t even know about buck dancing, let alone this connection.” Ira pointed out Algia Mae’s work also demonstrates that tradition is not a one-way street. He cites a step Algia Mae learned from Appalachian cloggers that found its way into her dancing.

Though Algia Mae learned from Appalachian style clogging, in our discussion, Ira remarked how few people within the southern dance community have taken it upon themselves to learn her style. This past month I began to wonder why this is the case with Algia Mae’s steps. Why weren’t they picked up by the (mostly white) college students who delved into Appalachian clogging during the resurgence of interest in southern dance forms in the 1970s and 80s? While Algia Mae’s presence was embraced by this community, few enthusiasts actually learned the details her footwork the way they did with other dancers. Was this due to her impossibly subtle but formidable facility? Was it their lack of familiarity with blues music? Was it the color of her skin? 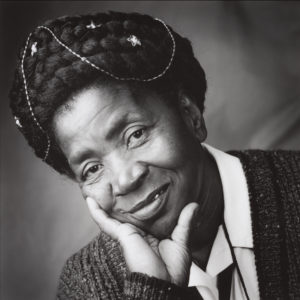 Tap dancers weren’t the only ones who responded excitedly when I showed video of Algia Mae this past month. Every time I pulled up a video of her on my phone for one of my queer friends at a party or sent Algia Mae’s YouTube links through Grindr, her dancing elicited appropriated phrases learned from RuPaul: “Bad bitch! Yaaaas queen.” In her dapper high-waisted trousers and pressed dress shirts, accessorized with scarves and ties, Algia Mae dances with gender as deftly as she plays the floorboards of her porch. She drags bluesman masculinity. In both Talking Feet and Blues House Party, it’s clear Algia Mae could keep up with the best of the boys in her dance community but in doing so she critiques them. Her dancing reveals a commitment to creative use of simple elements and ease over (displayed) effort. She makes us lean in rather than knocking us back on our heels. Given all this, it’s easy to see how, as my friend Clare pointed out, Algia Mae invites queer spectatorship. Maybe her self-identification as a buck dancer, outside the binary of percussive forms of tap and clogging, suggests a sense of queerness. She was simultaneously at the center of a percussive dance Venn diagram but also beaming at us from beyond its borders. A dancing link but also an outlier.

I’m not speculating about Algia Mae’s orientation here. It feels somehow disingenuous to tell her untold queer story if indeed there was one to tell. Rather, I am talking about queer stylistics, a style of in-betweenness, of beyond-ness. Hers is a critique so subtle that if you aren’t watching each smile or a twist of the ankle, you might miss it. Maybe Algia Mae performs what E. Patrick Johnson talks about in his essay, “‘Quare’’’ Studies, or (Almost) Everything I Know About Queer Studies I Learned from My Grandmother.” In the piece, Johnson teases out the racial-regional stylistics of southern black queerness, borrowing the term “quare”, turning it on its head as a former slur, and outlining the way it nuances LGBTQIA+ identities. Johnson also writes about the blues, noting the art form’s ability to perform “quarely” at the intersections of race, gender, and sexuality: “Quare singers such as Bessie Smith and Ma Rainey, for instance, used the blues to challenge the notion of inferior black female subjectivity and covertly brought the image of the black lesbian into the American imaginary,” (2001:13).

bell hooks, the gleefully uncapitalizing feminist writer, also alludes to the queerness of the blues in her book Feminism is for Everybody, describing performances of southern black queer stylistics in connection to the social scene around music where she grew up. “The lesbians in our small, segregated black community were usually married. Yet they knew who they really were. And they let their real selves be known behind closed doors, at secret jook joints and parties,” (2000:94). Again, while I’m not terribly interested in speculating Algia Mae’s orientation, her inimitable performance of self does ring with these descriptions of innovative stylistics of race, gender, and sexuality. Bringing hooks and Johnston into conversation with Algia Mae’s work feels important in, to quote Thomas F. DeFrantz’s essay “Blacking Queer Dance,” “seeing things differently…recasting history against dominant norms,” (2002:102). This seems crucial to me in remembering Algia Mae.

In returning to footage of Algia Mae again and again this month I was struck by how seamlessly she and her collaborators interweave dance and music, moving and sounding along many axes of identity. As the artists pass guitars, clap hands for each other, and keep time with their feet on Algia Mae’s front porch, one gets a sense for how in this tradition, especially at Algia Mae’s house, dance, music, and song are inextricably knotted together. During one clip, she twines her body and smiles in her sunglasses, twisting her hips and deftly tapping a board laid in front of the porch in her pumps. Her touch is enviably light and yet, her rhythms unmistakably direct our ears, invoking blues music even while dancing acapella. No matter how many times I watch this video, each time I find myself mesmerized by Algia Mae Hinton’s dancing…Dancing that was inflected by her place, her region, but ultimately, ingeniously uniquely her own.

Nic Gareiss is a MTAP fieldworker, professional performer, and dance researcher living in Lansing, Michigan. He holds degrees in Music and Anthropology from Central Michigan University and a MA in Ethnochoreolgy from the University of Limerick. His 2018 fieldwork for MTAP focuses on dance, marginality, and the political salience of moving (and sounding) bodies.