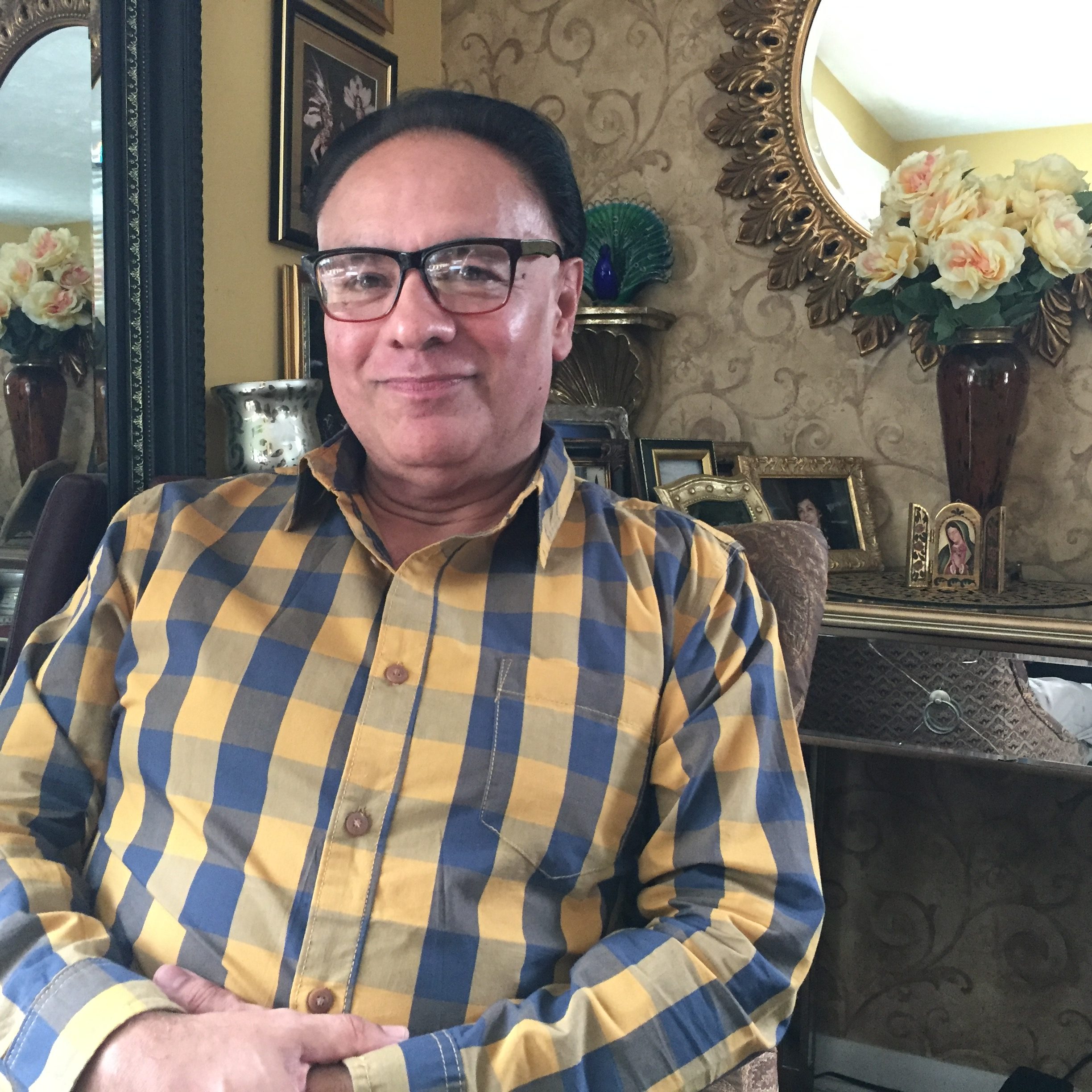 Dancer Lorenzo Lopez is eminently quotable. In the first two hours we spend sitting together in the bright gold and yellow front room of his home in Lansing’s Southside, surrounded by many photographs of him dancing through his years, I make four full pages of quotes:

“My mother and father both loved music, song, and dance. And of course, being from Texas, the music was the Conjunto sound of Northern Mexican Tex/Mex music. Every day my father had that music on.”

Lorenzo was born and raised in Lansing to parents who came from Texas. They brought with them their culture, music, foods, and Spanish language. Both his mother and father were active members of the local Latinx community, helping to found both Lansing’s Cristo Rey Church and Community Center and Los Cardinales, a Mexican American baseball league.

However, instead of going to baseball practice like his six brothers, Lorenzo and his sister went to Mexican folkloric dance class. At age five or six, his first teacher Senor Jose Orta was associated with the Comite Patrotico Mexicano. It was part of this organization’s Mexican Independence Day festivities that Lorenzo remembers having his first performance. Dance was both a means of cultural expression and a way to learn about and connect with his own body.

Lorenzo eventually began traveling to Mexico City for month-long dance intensives, starting in the summer of 1982. Eventually he moved to Mexico City to continue his dance studies, as well as to teach and to perform with the dance company Ballet Folklorico. “It was the only way that I could immerse myself: my mind, my body, my soul, my feet into Mexican folkloric dance. You have to live it!” 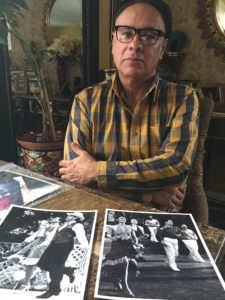 Dancer Lorenzo Lopez with photos of himself dancing with his company Sabor Latino in the 1990s. From left to right: Lopez performs a Norte Mexican polka at the Grand Rapids Latino Festival, Lopez dancing salsa at Lansing Community College’s Dart Auditorium.

While living in Mexico City, Lorenzo gained a broader understanding of the cluster of cultural forms known as Mexican folkloric dance. He explained to me that this term encompasses dances of the indigenous Mayan and Aztec cultures of Mexico, Mestizo dances (Spanish mixed with indigenous dances), and colonial Bailes de Época European dances (schottische, waltz, redova, polka, mazurka). Lorenzo also studied Spanish Flamenco and Latinx dances of Cuba, the Dominican Republic, Colombia, and Venezuela, including the cha, cha, cha, merengue, paso doble, cumbia, and salsa. But Lorenzo didn’t only acquire traditional repertoire during his time in Mexico. He also considers that time fundamental the way he thinks about movement at-large. “It was through dance that I learned how to walk, how to stand, how to turn.”

As a dancer myself, I’m struck simultaneously by both the simplicity and the completeness of this. Walk. Stand. Turn. I’m reminded that these actions have for hundreds of years been considered the foundation of so many dance practices. While neither Lorenzo nor I ascribe to the albeist notion that “if one can walk, one can dance,” I am awed by the succinct clarity of this gestural taxonomy he outlines.

But Lorenzo’s gestures don’t only please the eyes, his movement also exhilarates the ears. He stands with his weight centered, hands raised together to the right side of his face as he claps crisply, following with a series of rapid footwork triplet rolls, his heels knocking adroitly against the wooden floor of his living room.

Lorenzo lifts his Mexican dance shoe to show me the sole, pointing out the small nails affixed to accentuate the sound of the dancer’s feet as they drum out the rhythms of the music. Lorenzo tells me that this style of percussive movement, called Zapateado, represents the hybrid form merging indigenous and colonial influences as one highly developed part of the diverse landscape of folklore of Mexico.

“Putting on shoes changes the game. When you put on your dance shoes then you know you’re going to Zapateado, footwork. The Zapateado is Spanish in origin but we do not call it Spanish dance, it is uniquely Mexican. The influence of Europe is huge, and that’s a history some people don’t like to discuss. When the people from Spain brought their shoes and their footwork, it has now become Mexican…a lot of the dances that are Native American in origin are danced without shoes or in sandals. The Zapateado dances with shoes are Mestizo.”

As we speak about these influences and cultural collisions, Lorenzo shares with me another hybrid integral to his life – his work as an activist within the Latinx and LGBTQIA+ communities in Michigan. As the chair of Michigan Pride, Lorenzo works all year to prepare Lansing’s annual June festival celebrating gender and sexual diversity. He is also on the executive board of Suits and the City, an LGBTQIA+ social networking organization. Through his warmth and dedication to these communities, Lorenzo has become a leader traversing the axis of race, sex, and gender.

“I project positivity to human beings. I project confidence to all my friends. I also project unity to all my friends, but especially my LGBTQIA+ friends because sometimes they need it more than others. I learned all that through my journeys of life.”

It was through his studies in dance that Lorenzo came to understand his own identity better, both as an American of Mexican heritage but also as a gay man. “When you are in a dance class and see the way another person moves, it can also move you. You might see not only who you want to be, but also who you might want to be with.” In this way, Lorenzo collapses “I” and other, self and lover, into an endless circle of celebration and discovery. Rather than trying to isolate these facets of himself (dancer, activist, Mexican-American, LGBTQIA+ person), for Lorenzo they flow into one another, rubbing against one another, animating his life in a gliding dance of integrity and joy.

Lorenzo Lopez will be teaching a free Latin Dance Workshop focusing on cumbia on August 11, 2018 at Happendance Exchange (HXL), 1607 E. Kalamazoo St. as part of the Lansing Eastside Folklife Festival from 3:30 to 4:30. For more information, visit engage.msu.edu/LEFF

Nic Gareiss is a MTAP fieldworker, professional performer, and dance researcher living in Lansing, Michigan. He holds degrees in Music and Anthropology from Central Michigan University and a MA in Ethnochoreolgy from the University of Limerick. His fieldwork for MTAP focuses on dance, marginality, and the political salience of moving (and sounding) bodies.